Do you remember playing outside until dark, hearing your parents call for you to come home and not wanting to go inside?

Fast forward 20 years.  Does it seem as though your child is always inside watching TV, playing video games or accessing social media on their phone?

In the last two decades, childhood outdoor play has decreased while indoor play has increased. This has taken a toll mentally and physically on today’s youth.

Spending less time outdoors has contributed to a rise in childhood obesity and the decline of creativity, concentration and social skills.

The National Wildlife Federation states the average American child spends as little as 30 minutes in unstructured outdoor play each day and more than seven hours each day in front of a screen, compared to three hours a day in 1995.  In our expanding world of technology, it is extremely difficult for children to get away from electronics.

Too much screen time affects children in the following ways:

So, what are the benefits of dropping technology and heading outside?

Evidence demonstrates the many benefits nature has on children’s psychological and physical well-being. Recent studies have shown the necessity of spending time outdoors to reduce stress, increase creativity, and improve physical health and concentration.

Children who play outside are smarter, happier, more attentive, and less anxious than children who spend more time indoors.  Play in nature includes, but is not limited to, these benefits:

So, what can parents do to help get their children off the couch and outside? Parents can take their kids on walks, encourage outdoor games with friends, limit screen time per day, plan regular times for outdoor play, create activities with family members, and much more.

“It’s not so much what children know about nature that’s important, as what happens to them when they are in nature.”- Unknown 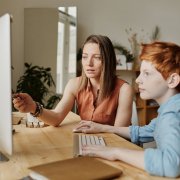 The Importance of Family Involvement at School

Binge-Watching and Your Brain

JUULing – Vaping Gets a New Look
Scroll to top